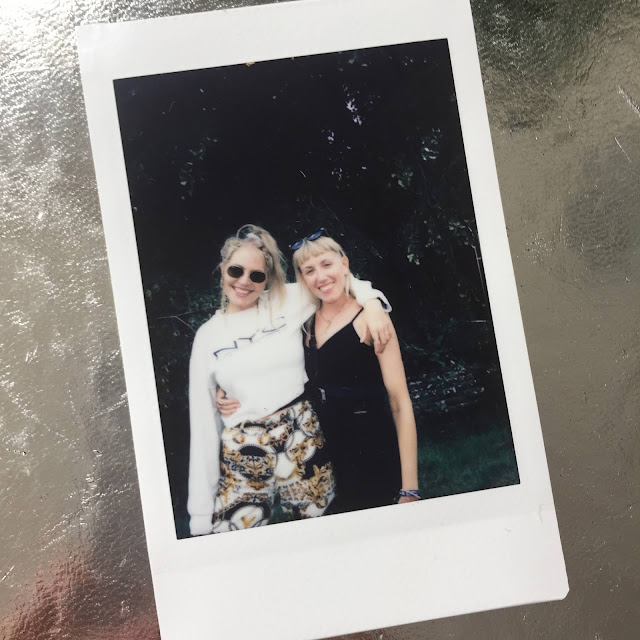 IDER is the collaborative project of best friends Megan Markwick and Lily Somerville, who write airy dream pop from their North London bedroom. The outfit have attracted the attention of artists such as Shura, who has later gone on to produce songs for the band. This year they've already secured a spot at one of music's most prestigious festivals SXSW, and we had the pleasure with catching up with them ahead of their set at this years Green Man Festival.

How has your festival season been so far?
Lily: It's been pretty chilled you know. We've been doing the odd festival here and there, we've been in Europe quite a lot and we've had a couple of UK dates.
Megan: It's been really fun actually we've had some really great gigs over the summer.

How was SXSW?
Megan: It was really good! It was the first time we had been in America so the whole concept was exciting. It was received really well. We were on more of a chill vibe in terms of how many shows we had but some people had like 14 shows in a short space of time. It was amazing, a lot of lugging your gear to different venues and quick soundchecks.
Lily: The whole city was on takeover! It's enormous and you really feel like you're at something monumental.

It must feel very different playing in a field rather than in a venue?
Meg:  It does! I quite like the city takeover festivals.
Lily: But when you get a gig in a really good tent at a field festival there is something really special about that.
Meg: There is a real community feel, it's a special weekend away from reality.

When you're not playing this weekend, what will you be doing?
Meg: Do you know what we can't stay. We have lots of family and friends here and we are so gutted. We have to go to Switzerland to play another festival! We would have love to have stuck around because we would have partied.
Lily: I would have loved to have seen Fleet Foxes.
Meg: I love The War On Drugs, that would have been amazing.

How does playing such a diverse festival, in terms of gender equality, compare to other festivals that you've played?
Meg: It's really alarming when you look at a line up and you see that there are only male artists and we're like 'Where the fuck are the female acts!?', and that's how it has been for a long time because of the culture of music, especially when these rocky festivals have been so male dominated. So it's so great to see female bands.. We play instruments as well as singing, and that's something that's still considered unique, being female. Which is great that it's changing.
Lily: We are always aware of it.
Meg: It's getting there but it's not there! We need to change perceptions, and it's festivals like these that are doing that.
Lily: The stage we're playing is literally an all female line up, it's great!

How has living in London shaped your song writing?
Lily: Probably in a lot of subconscious ways. You go and see so much live music in London and it feeds into everything. London is a city is very forward thinking and you're really encouraged to have a voice, especially in certain circles which are quite liberal. I think in that sense, lyrically and in terms of the things we write about, it's influenced by that kind of culture. In terms of sound as well.
Meg: There's a lot of artists, it can be intimidating how many artists and bands there are, but then it's equally great because that inspiration is huge.

Do you feel a pressure to stand out?
Meg: Yeah, I think everyone must feel like that.

How do you stay authentic?
Lily: I think that's our biggest focus because it feels like if we're not (authentic) then what's the point? Being ourselves is the thing that makes us unique, we have to make sure we are being true.
Megan: It's a fine balance because it's important to be aware of what's going on, and of other bands and artists, but at the same time it's important to not get wrapped up. There will always be a conflict...

You're two best friends that collaborate musically together, do you think women collaborating together is important?
Megan: It's so important! We live together and have done for a few years now, and we're together all the time. We write music in our house, and our friendship is the most important thing by far.

What can people expect to hear from you in the near future?
Megan: A lot of new music. Our next UK show is October 2nd at Village Underground, that's our next London headline and we're so excited!
Lily: We've been told in terms of the sound and the set up it should be wicked. We've been buried away in the studio for the past few months and we're very excited to get our new music out.

You can get tickets for IDER's headline show at the village underground here!