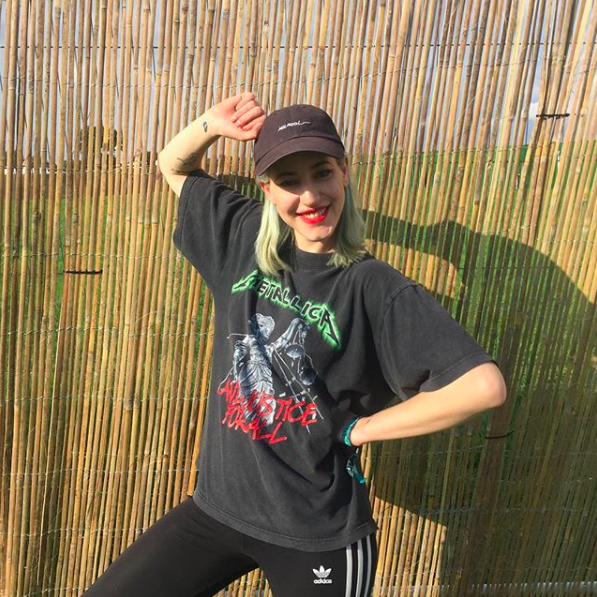 Du Blonde is the solo project of established artist, musician and animator Beth Jeans Houghton. Their punchy blues-punk anthems are cathartic and fit for a saddened age. After a three-year release hiatus and a third album in the pipeline for 2019, we caught up with Beth after their Main Stage set at End Of The Road.

How are you finding ETOR so far?

I love EOTR, it’s my favourite festival! I was nervous before my set but it went really well. I have a new band and this was our second show together. It was really fun, and there were more people than I thought there would be.


There was a long time that I didn’t play a lot of shows because of my label situation. The planning was more focused on putting a record out and then doing a couple of weeks of touring. When I was younger I was touring all the time. I don’t know whether it’s specifically festivals or shows in general, but I love doing them and I want to get back into it.

Your last album release was in 2015, and your new record is coming out next year. How has your time away from the limelight help your songwriting process?

We are going to start putting singles out in the next couple of months. We recorded most of the record in Oakland, with two of the guys from Ezra Furman’s band, which was really nice. This is the first record that I have produced myself, which is something I always wanted to do. At the moment, the team of people I have around me is really great and supportive and allowing me to do what I want, and don’t make me do things that I don’t want to do.


Do you think it’s important for musicians to have that time away?


For me, it wasn’t planned. I also do animation and art so I'm always going back and forth between things. I always think, even if you’re not writing, psychologically, especially if you live in London, to go away for a few months and reassess and get grounded. I like to go away to write if I can. It’s more about for me, with life, I write about things immediately after I'm sad. I had a therapist a couple of years ago and I was like "You know if I really do get happy, I won’t be able to write music" and he said "No Beth, this is not how it is." Usually the songs I write when I'm happy aren’t very good. I think it’s a form of therapy in itself. I have always documented things and put how I feel into a song, or a picture because then it’s there and I can walk away from it. It’s a good way to deal with things, I think.


What can people expect from the new record?


I would say somewhere in-between the first record and the last one. Lots of lead guitar harmonies and garage punk, combined with some song written elements. It was really fun to make, and I'm really excited to play it to people who haven't already heard it.


You spoke a bit about your animation and art, how do these other creative influences impact your writing?


I've always had a very strong visual style in my head. For this record, I’m going to make all of the music videos myself. It’s nice to have it as a whole package. It’s something you can express through animation or art that you can’t always do through music, and vice versa. Having all of these creative things going on is good for me because it means I don’t get bored easily. I’ve always wanted to do it this way, and people would try and get me to delegate different roles. This record that's coming out is the first one where I totally feel completely like it's mine. Even just for my personal experience, it was really important for me to have that. People always try to get men to do your work for you. I would love to put all of my energy into what I’m doing, so much of it's judgments or other people’s lack of expectation.

How did you find the change from being in band to being a solo artist?

The first record was with a band but was technically a solo record with a band. Even as I've changed from that band to Du Blonde, people would go up to the musicians I hired to play live and be like "Oh, I really like this song that you wrote." Someone said once that they could tell the difference between the ones I had written and the ones that were co-written even though I wrote them all. It’s the assumption that I have everything written for me. The transition was more about being labeled so much as folky, and I wanted to regain a sense of self and be able to have a character, in a sense. I'm not an extroverted person, so being on stage feels natural in one sense, but only because I'm in a totally different head space. It was also nice to not use my real name, it’s almost a separation. I wanted a fresh start. Fuck everyone who tried to make me into other things.


You published a social media post recently talking about how when you were younger people would tell you that you couldn’t be a musician – how did you fight that negativity?


I've always been a very insular person. In the beginning, I would never try to do anything out in the open. I would basically, go home and make stuff. My mum was so supportive. I was doing music at High School, and I wrote a song and I was the only person in the class that failed because the chorus got quieter. My teacher told me that it wasn’t a proper song because the chorus needed to elevate. I remember thinking "That’s bullshit!" I didn’t listen to them, but it worries me how many kids might be making the most fucked-up amazing weird stuff and someone tells them that it won’t work, and they end up getting a job that they don’t want.


What would you tell people that were told similar things to what you were told? What advice would you give to your younger self and to kids that age?